The Medieval hamlet of Ceri is one of the most delightful tiny villages in central Italy and featured on our popular day tour from Rome and shore excursion from Civitavecchia: COUNTRYSIDE SPLENDOR.

Located in the Roman countryside about 1 hour from Rome and about 45 minutes from Civitavecchia Cruise Port, Ceri is a very popular destination for visitors, cruisers and locals for many reasons!

When you arrive in Ceri through the rustic countryside, you will come face to face with a steep tuffa cliff with the remains of a medieval era fortress (fortified defense walls) that gives the incredible impression that the village rises right out of the cliff!

The unique rock formation of the cliff offered a natural defense from enemy attacks, and local ancients have settled here since the pre-Roman Etruscan era around 7th century BC.  Following the Roman conquest of the Etruscans, the Romans settled here as well – as discovered in numerous Etruscan and Roman nearby tombs.

Accessible only via the original medieval single lane wide street that enters through the main arched gateway, and continues upward flanked by tall stone buildings from the bottom of the cliff to the top of the village square, you find yourself feeling you’ve just traveled back in time a thousand years! 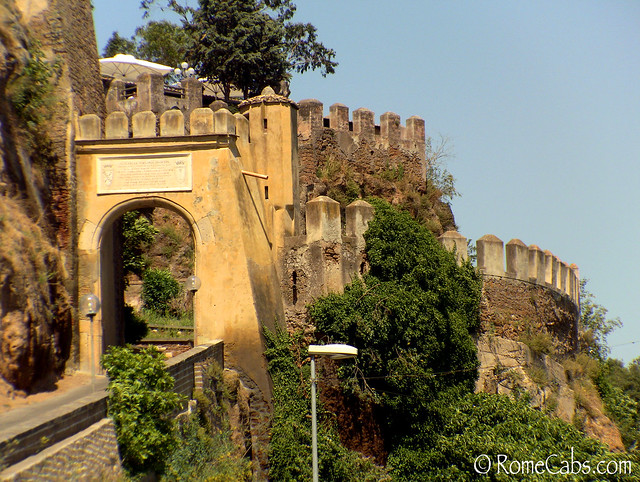 Traffic is controlled through a stop light at the top and the bottom, and vehicles take turn driving up and down as 2 vehicles cannot fit on the street meant for medieval horse pulled wagons, not modern day vehicles.

.
Must See Countryside Wonders on your way to Civitavecchia Cruise Port

The village that we see today was founded in year 1236 when nearby locals abandoned their town of Caere for the better protected clifftop location, and named it Caere Novum (New Caere), to differentiate it from the previous Caere Vetus which nowadays is known as Cerveteri.

Once you arrive on the top, you’ve reached the town square that’s surrounded by historic buildings and the 12th century Church of the Madonna di Ceri.

The church merits a visit, even if on the outside it appears austere. This Romanesque church was built on top of an ancient site (possibly a temple) where the ancient Etruscans and Romans who occupied this site venerated the goddess Vesta.

Inside, you will be amazed at the recently discovered original Medieval frescoes that graced the church walls depicting scenes from the Old Testament.

Church of the Madonna di Ceri – with RomeCabs

Since the 14th century Ceri changed hands as it became the property of some of Italy’s most illustrious and famous families like Anguillara, Cesi, Borromeo, Odescalchi, and Torlonia.

Ceri is also well regarded in Italy for its family owned restaurants that serve some of the region’s most delicious traditional cuisine using fresh and in season local ingredients and secret recipes passed down from generation to generation.
.

.
Traveling to Italy this summer? Don’t forget to bring THESE with you
.

Thank you very much for reading our Medieval Hamlet of Ceri – Postcard from RomeCabs travel blog.  Please visit our website for more tours and transfers in Rome and around Italy.