This week’s Video Postcard from Rome features the ancient Trajan’s Forum which is one of the Seven Wonders of Ancient Rome.
.

Trajan’s Forum was last and largest of the monumental public squares that was built in Ancient Rome (Imperial Fora).

Built by the famous architect Apollodorus of Damascus, Trajan’s Forum was commissioned by Emperor Trajan (Marcus Ulpius Traianus) with the spoils from his conquest of Dacia (modern day Romania) in 106 AD.  The Forum was inaugurated in 112 AD, and the victory column in 113 AD.

Paved with marble and lined with stunning architecture, statues and trees, Trajan’s Forum was a sight to behold.

All the buildings (with the exception of 2 libraries that were built of brick) were made of marble.

The 980 feet by 607 feet Forum was flanked by large colonnaded porticos and exedrae – roofed semicircular recess set into the structure facade on both sides of the forum.

The entrance to the Forum was on the south side through a triumphal arch topped with a statue of Trajan riding his triumphal chariot (the arch or the chariot no longer exists, but images of it remained stamped on ancient Roman coins).

The main structure that occupied the center of Trajan’s Forum was the colossal Basilica Ulpia. This public judicial building (the Roman version of town hall) separated the temple form the main courtyard.

This was one of the most important Roman basilicas following the other significant Basilicas Aemilia and Julia located in the Roman Forum.  Basilica Ulpia’s vast interior was richly decorated and topped with gilded bronze roof tiles.

The architecture of the Roman basilicas was adopted by Emperor Constantine as the plan for Christian churches.

Many of the columns that separated the aisles inside the basilica still exist standing, although many have fallen over time. 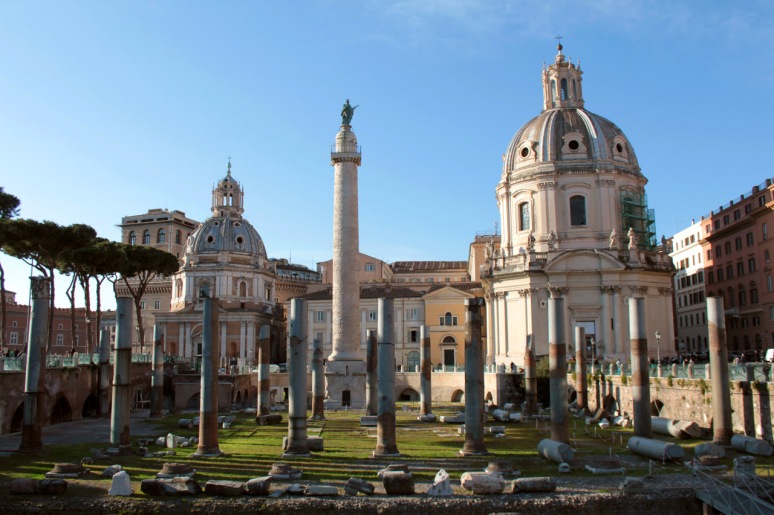 The most famous column of all is Trajan’s triumphal column that towers over the forum.  Standing at almost 100 feet, the column was assembled with marble drums – each weighing about 30 tons at 12 feet in diameter. 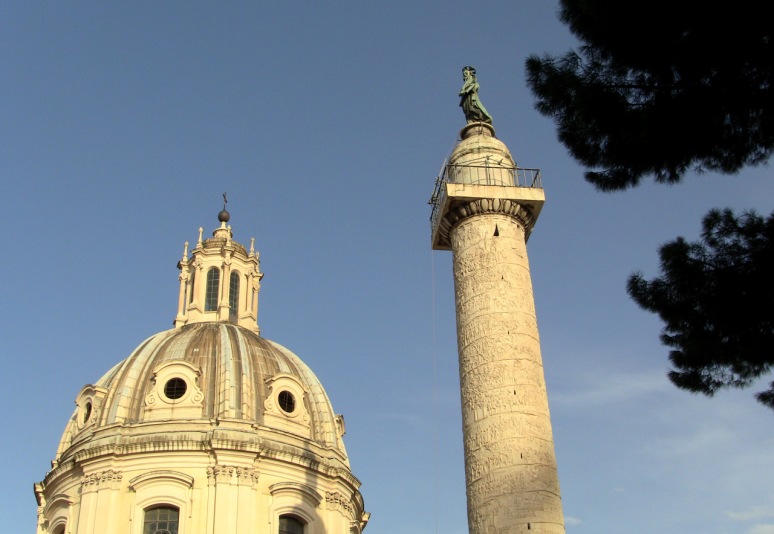 A frieze telling the story of Trajan’s victorious military campaign over Dacia winds around the column shaft 23 times.

A stop to admire the impressive Trajan’s Forum is included in our SEVEN WONDERS OF ANCIENT ROME tour.

Thank you very much for visiting our blog. For more information on our Airport Transfers, Civitavecchia Transfers, Day Tours, and Shore Excursions, please visit our website: