.
Within walking distance from the Colosseum and Circus Maximus – almost secluded-  is an expansive Roman complex that is often overlooked by tourists. As grandiose as it is (with walls still standing at 30 meters tall), it’s equally lesser known.

The good news about that is that you won’t find the Baths of Caracalla crowded with visitors and long ticket and security lines.

With many fewer visitors you almost feel as though you have the place to yourself and imagine what this magnificent ancient bath complex must have been like in ancient Roman times: even though the ceilings and walls have collapsed, opulent ornaments gone, and impressive statues removed and found new homes in museums throughout Italy.

Going back to 3rd century AD:

Emperor Caracalla ruled for only 6 years (211 – 217), and initiated the construction of what should have been the ancient world’s most impressive Roman public baths. As with many Roman emperors, Caracalla was also assassinated, and did not see the completion of his imperial baths.

It is estimated that it took about 13,000 prisoners of war, 6,000 tradesmen, 21 million bricks, and about 6,300 cubic meters of marble to complete what became Rome’s 2nd largest bath complex.

Upon completion, the imperial baths of Caracalla included a park, swimming pools, public libraries, gymnasium, frigidarium (cold rooms), tepidarium (warm rooms), and caldarium (hot rooms).  The bath complex was not just for bathing, but a place for leisure, study, or hold meetings. 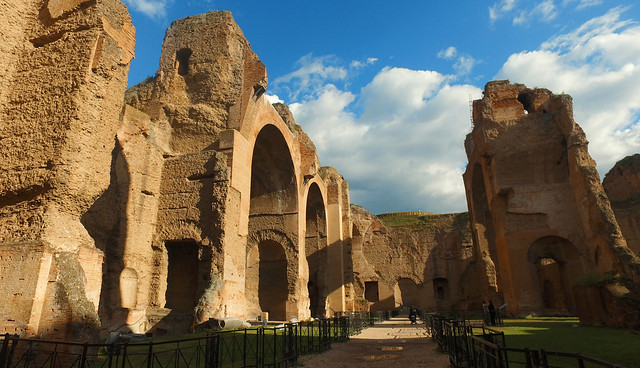 As public baths, they open to everyone at no charge, and were able to accommodate up to 1,600 bathers at a time. The buildings were heated by a hypocaust – and underground heating system where water provided by a dedicated aqueduct was heated by burning wood or coal.

The baths were in continuous use for 400 years until it was destroyed in the 6th century by the Ostrogoths during the Gothic War.

Although largely in ruins due to damages by nature and man, the Baths of Caracalla have for centuries served as an inspiration for architects worldwide, and also inspired awe in the millions of visitors who walked through the impressive colossal ruins.

For more information on our SEVEN WONDERS OF ANCIENT ROME tour that includes a visit to the Baths of Caracalla, please visit our website:
.

Thank you very much for choosing Stefano’s RomeCabs for your Transfers and Tours in Rome and beyond.  We look forward to welcome you to Italy!